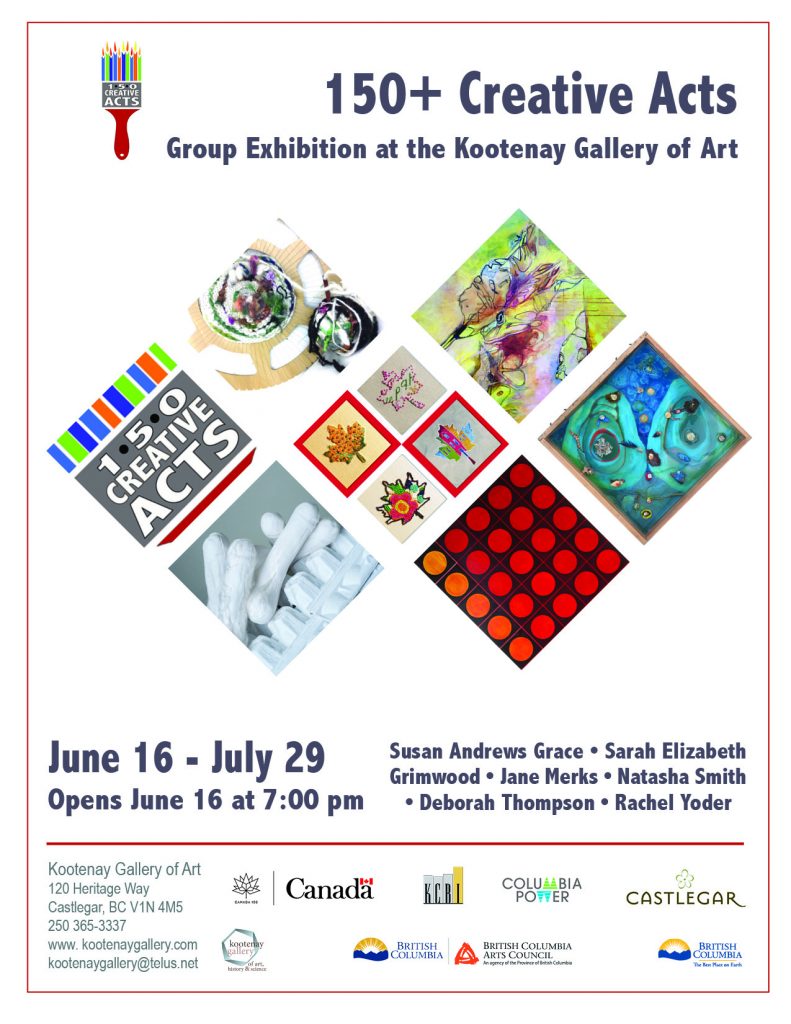 In this group exhibition, six professional artists respond to the theme 150+ Creative Acts. The interpretation by each of these artists is unique and stunning.

What’s in a number? This summer, on the occasion of the 150th anniversary of Confederation, the number 150 brings up a variety of reactions, from proud patriotism to political resistance.  It has taken on a social and cultural significance. Focussing on 150 years of Confederation raises questions such as, how do we encompass all that is Canada into one celebration? whose Canada are we celebrating? and why 150 when Canada has been occupied for centuries?

While selecting the theme for this show and for the wider community project, I wanted to give a different context to ‘150’. I chose to focus on creativity and creative acts, because of the obvious connection to art and my desire to encourage creative thinking, being and living. I was interested in exploring its relation to time, as well. An anniversary is a marker in time to pause and look backward and think about the future.  We are celebrating (or protesting) the anniversary of an act of creativity – the birth of Canada as a nation in the European tradition. If we think of the infinitive, “to create”, it is an action. We can only act in the physical present. A new creation cannot be separated from the actions and influences of the past. A creation is brought to life with a vision for the future.  But the act of creation exists in the here and now. As Buddhists believe, the present moment is truly all we have.

In creating the project, I wanted to have both a gallery exhibition and a community-engaged project. For some adults, creativity is for children and youth or for those who call themselves “artists”. But there are those of us who believe creativity is within everyone. I encourage all people of all ages to express themselves creatively (hopefully as part of our project!) But this gallery exhibition is to celebrate and reflect on six people who have chosen to explore creativity as their life’s path and who cause us to marvel at or contemplate their creations.

The artists’ work in this show reflects the diverse range of views and reactions of Canadians to the topic of Canada 150.  Jane Merks’ mosaic of maple leaves reflects the diversity and plurality of Canada. They are a beautiful study in technique and an homage to other creators. Similarly, Natasha Smith has explored the process of gathering objects into a collective whole. Smith canvassed her community to contribute items to this project to create her shelves. Likewise, Sarah Elizabeth Grimwood looked to the community to contribute to her work. She employs weaving as a metaphor for the national tapestry created by our unique voices. Susan Andrews Grace also references woven fabric in the form of Hudson Bay blankets but in an exploration of exclusion rather than inclusion. Grace critically examines how patriarchal European culture and values have dominated the development of what we know as Canada and impacted First Nations people.  Rachel Yoder examines the past but as a personal narrative. As the layers of time accumulate, her story becomes richer and more complex. Deborah Thompson’s work stretches from the past, referencing the tradition of Canadian landscape painting into the current as she re-defines and personalizes landscape painting to incorporate the body and questions the future, the horizon line of what is beyond. Thompson’s metaphor of the horizon line as the point between certainty and uncertainty parallels the present moment. We have no sure knowledge of what lies ahead for the next 150 years. However, the practice and attitude inherent in creativity can help us anticipate and design what lies beyond and lead us in a direction of our choosing.

Susan Andrews Grace – Settler Culture
I wanted to show the nonlinearity of history as experienced rather than as written to represent absence of certain life experiences in written history. For example, we know that women have existed or we’d not have a population. We know that indigenous peoples have lived here for at least 15,000 years yet Columbus ‘discovered’ the New World— bizarre news to its denizens. And, as Jesus and the Victorians said, the poor are always with us.
Settler Culture is visual punctuation to 150 years of creative history, which has been capable of denial, ignorance, and cruelty as well as cooperation, courage, and industry.

Through my work I aim to create a deeper connection to the fabric of our world.
The Spun Ethnicities and Written Heritages collected throughout this exhibition will be woven together as one symbolic work representing our intentional and accidental connections.
From our similarities to our differences we cannot deny that we are human. The weave of the tapestry acts as a metaphor for what connects us all: our humanity. In this textile work the metaphoric fabric of our country comes alive in the overlap of warp and weft, the weft moves over and under the warp, the warp moves over and under the weft, creating a woven cloth, and our permanent connection to one another becomes clear.

As I created these 150 leaves, I used techniques I haven’t worked with in years. I also learned new things, not only about other cultures that make this country great, but also about what has influenced me as an artist for over 50 years. I chose to honour some of the artists I have admired.
Each piece is its own little world of colour, texture, design or technique, but it’s as a collection that it shines – as do we when we are together. 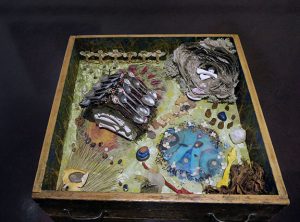 I collected and was given a variety of objects for this project, including decorative collectible spoons, pins, bones and natural materials to include in the drawers. The spoons and pins reference the colonial past time of making a collection of objects that connect to a specific place or stand as a symbol of patriotism. The works reference the creative act and practice of collecting and storing memories in the form of a small object, the man-made and natural objects are juxtaposed in strange dioramas that are reminiscent of childlike play. The drawers are stacked low to the ground so that even the youngest viewer can look down from above into the drawers to view the 150 objects and creative acts. 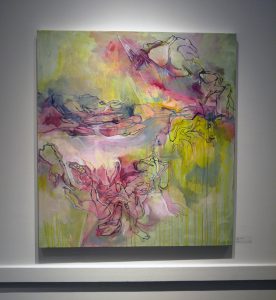 … as I sunk deeper into the process of creating landscape paintings I was thrown into a cyclone when aspects of the human and animal body began to appear in one of the paintings. This grabbed my attention with a big YES. Soon, I was volleying between two separate yet related series of paintings – that of the land body and that of the animal body. What remained common to both series was a thin line, a horizon line that dissected the pictorial space. This line was serving as a scaffolding for the imagery and provided a piece of ground when I needed one.

As I worked my way through the panels, the early squares became more and more layered. The first ones painted represent the past moving forward to the present, with the shape obscured as the layers of paint accumulate over time. The squares represent the years of Canada and the layers of paint remind us of the layers of history that have built the depth and richness of the country we have now. Bits of debris or flaws in the canvas accumulate paint as the layers develop. The variation that occurs gives vibrancy to the repeating of the form much in the same way that each of us adds vibrancy to our country’s history.