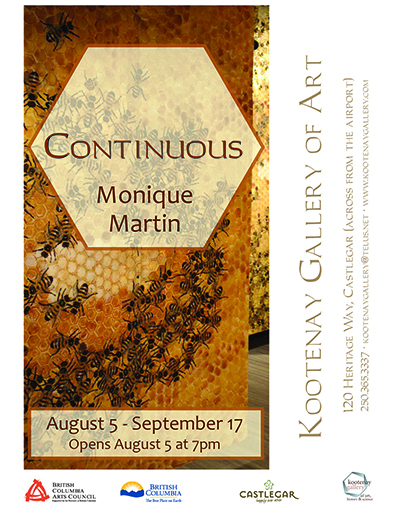 Continuous by Saskatoon artist, Monique Martin consists of a series of large floor-to-ceiling linocut prints along with a sound and smell aspect throughout the gallery space, that, according to the artist, give visitors, “a sense of what the inside of a hive looks like, and feels like, as well as to understand the delicate nature of what happens in a hive as it relates to the interactions of humans.” If the name Monique Martin sounds familiar, she is one of the artists featured in Castlegar Sculpturewalk this year. Slow Emergency, located at Columbia Ave. and 4th Street, is thematically-related to Continuous and you may wish to view both with this context in mind.

As humans, as animals, we are here to procreate, just like the bees.  Humans fill the remainder with goals, dreams and experiences far beyond procreation.  Is denying procreation counter intuitive, or is it a survival strategy just like the 1000’s of bees in the hive that do not reproduce? For bees it is about survival of the species, for humans it is so much more than just survival. There exists a cycle where one goal ends and another begins, one dream dies and another begins. Is goal setting an instinctual process or is it programmed due to experiences? Are we forced biologically to look for a new way when the old one is either completed or impossible? One bee begins where another left off, moving on instinct, awareness so ingrained that the same activities, reactions and cycles occur for centuries.

Life is a continuous cycle of growing and changing, no matter who you are or where you live. Nothing is static. Nothing stays the same. Change is a constant in this evolving world in which we live. There is, however a commonality among animals and insects to produce enough offspring to continue the species and combat the changes in the environment. Bees coalesce in the hive forming a unified machine that can withstand almost everything, even human intervention.

Enduring, surviving and living all ring true on the continuous survival cycle.  The economics of energy is fine tuned to produce on a continuous cycle in the various ecosystems.  A continuous circle of cooperation exists in the cycle of survival that is ordered and industrious.

The silence of beginning again, starting over, can be deafening. The hum of continuing, moving forward, persevering, in an endless quest to survive and remain part of the unbroken whole of the world can create a similar deafening sound; deafening in the possibility of a flaw in the absolute way of survival.  Continuing and beginning are similar, but yet different. The difference lies in keeping motivated and engaging motivation.